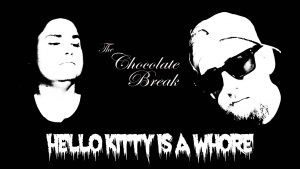 Did you know? That Hello Kitty is a WHORE? My friends, it is a sad thing! Actually, Hello Kitty is pretty tame and so that’s a false statement. But today is Halloween and so watch this video presentation. We’re professionals, specializing in the finest content you can see anywhere. You owe it to yourself to envelop your nature in our leavings. Oh and salutations of the holiday to you.

Episode 67: Hello Kitty Is A Whore 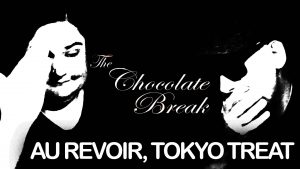 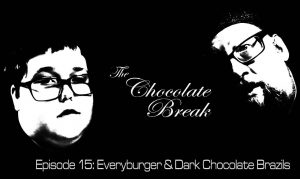 Well hey look – it’s Andy! This is his very first appearance on The Chocolate Break and he did an excellent job; watch him weave his magic…

A Japanese company called Bourbon making hamburger shaped little chocolate cookies. What the hell?! Thank the Scissors of Hope for their true cuts. Weird – they don’t taste like bourbon or burgers. But they do taste good.

Found at a little Canadian store specializing in British things – many of which get a discount as they’re expired. These are succulent and classy. Lotsa chocolate! 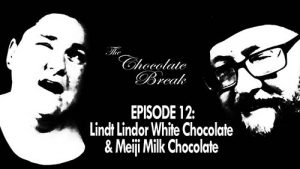 Switzerland and Japan come back to haunt us yet again in this interesting duo. The time honored question of what caused people to start enjoying milk from animals comes to pass.

Redemption! After really feeling let down by the Creation range, Lindt wows us with this white chocolate. The snarls of glee for their cave of chocolate could be heard from miles away.

Guessing this is NOT made from dog’s milk, but what if there was a dog milk chocolate bar? Perhaps dogs would like it? I’m guessing the cacao would still be bad for them. 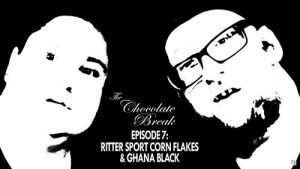 This time we visit Germany and Japan with a couple more varieties found at Uwajimaya (I think they were both found there at least).  We some some violence, a little acquiescence, and some reflection.

Interesting square shaped bars. The packaging is fancy and everything, but yeah the corn flakes weren’t the way we expected.

Japanese chocolate is an interesting thing, especially the darker varieties. It tends to focus more of the cacao rather than the sweeter side of things which is a nice change. 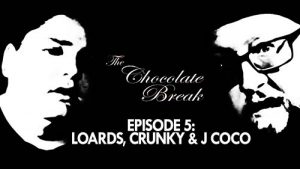